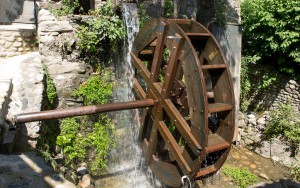 The existence of flour mills in the vicinity of La Seu d’Urgell has been documented since the 12th century, although they were surely here before that. 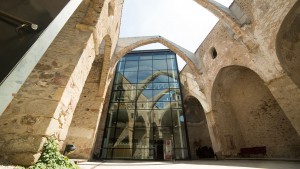 The church of Sant Agustí

From the 16th century, the Augustinian Friars took on the documented tasks of caring at the leper hospital which, since the 13th century, had been founded on the outskirts of La Seu d’Urgell. 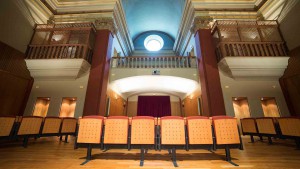 The Church of La Immaculada

The main façade of the Church of La Immaculada forms the western side of Placeta de les Monges, located above the Plaça del Carme. 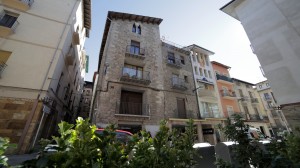 Cal Serrano is one of the most outstanding buildings of Gothic civil architecture of La Seu d’Urgell, which could date to the 14th century, like Ca l’Armenter and Cal Roger, and which stands on the corner of Carrer Major and Carrer de Santa Maria. 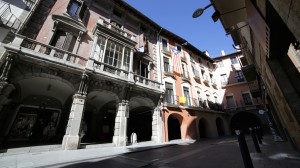 Cal Tarragona belonged to one of the most influential families from La Seu in the late 19th century the beginning of the 20th century. 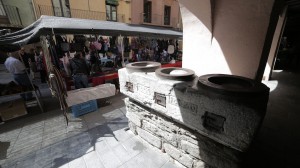 The grain measures are located under the porches of Carrer Major, close to the junction with Carrer Capdevila. 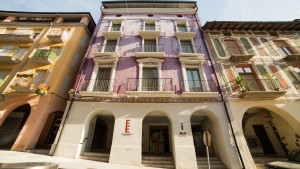 The Espai Ermengol is located in the Cal Mossèn Poldo, one of the porticoed buildings that define the initial stretch of Carrer Major. 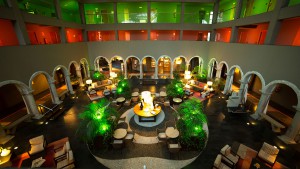 The cloister of Sant Domènec

Joined to the convent of Sant Domènec, the cloister was built in a classical style that must date to the 18th century. In 1974, when the courts were moved to another building, the cloister became part of a new Parador Nacional de Turisme. 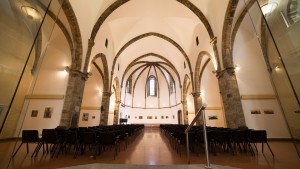 The Church of Sant Domènec

Until well into the 19th century, the Church of Sant Domènec was part of the Dominican convent of La Seu d’Urgell. 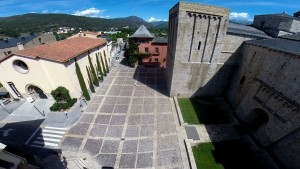 The town hall and the Plaça dels Oms

The Plaça dels Oms is a place that plays a great symbolic role in the civic life of La Seu d’Urgell, with the Casa de la Ciutat forming its eastern side and with the impressive body of the cathedral on the southern side. 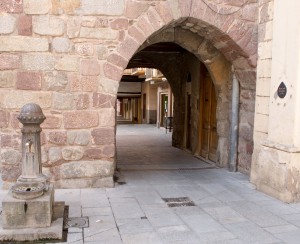 The Andorra Gate. The Walls

The Portal d’Andorra, the old Andorra Gate, is the main vestige preserved from the ancient complex of city walls and fortified strongholds that protected and encircled La Seu d’Urgell. 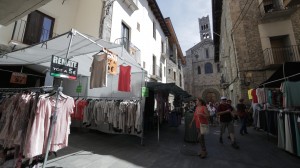 The northern end of the Carrer dels Canonges was known in the medieval period as “La Plaça”, (the square), which defines its role as market place. 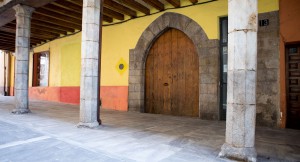 Along with Ca l’Armenter, this is one of the most notable buildings in the street. It is located round about the middle and has a ground floor and three upper floors. 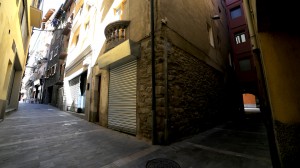 From the 13th century, the Jewish community of La Seu d’Urgell became one of the most prosperous of the Catalan Pyrenees. 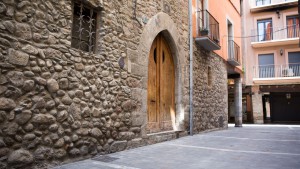 A corner building of notable dimensions, located at the junction of the Carrer dels Canonges and Carrer de Sant Just. 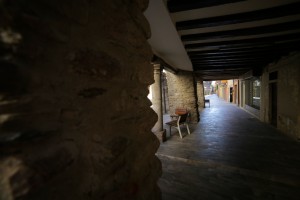 In the Middle Ages, at a time of demographic and economic expansion in the Pyrenees, the centre of La Seu d’Urgell was arranged around the main axis which is now the Carrer dels Canonges. 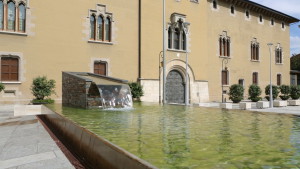 The Episcopal Palace and its surroundings

During the Middle Ages, the Bishops of Urgell would change the location of their residence according to the circumstances at any particular time. 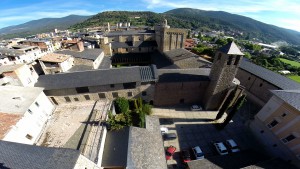 The Deganat or Deanery building, of rectangular plan, is attached to the Church of Sant Miquel, and forms the middle section of the Cathedral cloister. 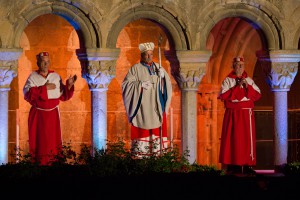 It was only ten years after this strange death that Bishop Ermengol was venerated as a Saint by the same inhabitants of La Seu who had admired him while he was alive. For many years, the Fira de la Seu d’Urgell was held on 3rd November, the feast day of this patron Saint. 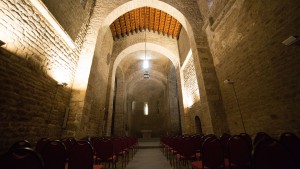 The Church of Sant Miquel

The current Church of Sant Miquel, dedicated to Sant Pere in the 14th century, is the last vestige of the construction activity by Ermengol, Bishop of La Seu d’Urgell in the 11th century. 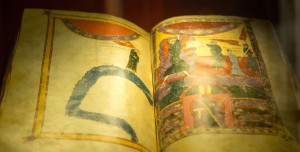 The Beatus of La Seu d’Urgell is an exceptional work of incalculable value. It is a 10th century manuscript, lavishly decorated with miniatures of great chromatic vividness and of enormous symbolic content, of which 239 pages have been preserved. 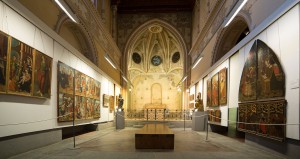 The Museu Diocesà d’Urgell (Diocesan Museum of Urgell) brings together an extremely interesting artistic collection originating from the different parishes of the Bishopric of Urgell. 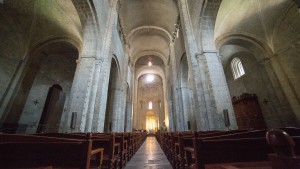 Since the 6th century, three ancient churches had been built on the same site as the current Cathedral of Santa Maria, which was constructed on the site of a previous Cathedral built by Bishop Ermengol. 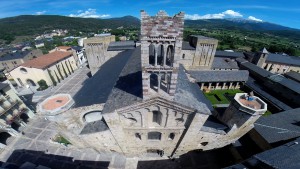 Built on the site of an earlier cathedral, the current Cathedral of Santa Maria was the main architectural undertaking of the 12th century in Catalonia and the principal example of the full Catalan Romanesque.

The first proposed itinerary has the Cathedral of Santa María as its starting point, the stand-out monument in La Seu d’Urgell, which determined its origins and was fundamental to its character as a city. The Cathedral is intimately linked with the existence of the bishopric that extended right across the Catalan Pyrenees and much of the Pre-pyrenees, with all the human movement and the needs that this situation generated over time. Accordingly, different types of building – for worship, housing and administration – have been built around it, in accordance with the signs of the times. In this sense the Bishop, with their cathedrals (a name which indicates of the place where the Bishop has his cathedra, or seat) generate a very specific cultural landscape, linked to the urban environment with its own facilities and annex buildings, such as cloisters, rooms and smaller chapels; and also with unique residences and palaces occupied by bishops or canons, parish churches and buildings for various services. In the case of La Seu d’Urgell, given the richness of its heritage and monumental wealth, the Cathedral and its surroundings is the most interesting area of the city.

We start the itinerary in front of the main façade of the Cathedral of Santa Maria. Through this monument, we can immerse ourselves fully into the medieval imagination in order to grasp the Romanesque aesthetic, the feudal world, the power of the Church and the role of La Seu d’Urgell as benchmark of the Pyrenean identity.

We can choose to visit the Cathedral both inside and out. A good option is to start the visit inside, which you can enter with a joint admission to the cloister complex and visit the Church of Sant Miquel and the Diocesan Museum. It is worth mentioning the extraordinary dimensions of the interior of the Church, with its three naves, around which the interior space is organised, the height of which seem to be the forerunner to a height verticality that would not become common in Catalan churches until a century later. Also important are the cloister and the Church of Sant Miquel. From the cloister we can also access the Museu Diocesà d’Urgell the Diocesan museum, which is the city’s most important museum facility and which has a collection consisting of pieces from all the parishes from the bishopric of Urgell. The visit to the Diocesan Museum provides access to special areas such as the Church of la Piedad, covered by a delicate plateresque-style coffered ceiling. Within the Diocesan Museum one has to mention the Beatus of La Seu d’Urgell, a 10th century illuminated manuscript, with commentary on the Apocalypse by Beatus of Liébana, an amazing piece. Once outside the Cathedral complex, we can continue this itinerary following the outer perimeter of the Cathedral. We pass by the great hexahedronal tower to the north and set ourselves in front of the central apse, which represents the culmination of the architectural art that guided the construction of the complex. Due to its uniqueness, this is a good point to talk about the people who instigated the building of the current cathedral, essentially Bishop Ot, who sponsored its building, and Ramon Lambard, one of its master craftsmen and the best known due to the existence of a unique document setting out his contract. Starting with these characters we gain an understanding of the issues involved in building in the Romanesque period, the aesthetic criteria, the carving of stone in the first and in the second Romanesque and the construction techniques. The building of a cathedral was a very costly and complex project, which could extend over several generations and was subject to the effects of circumstances outside its construction. In the case of the Cathedral of La Seu, for example, the construction effort experienced the effects of the sacking and the destruction caused in the attack orchestrated by Count Ramon Roger de Foix in 1196, which brought about a sudden stop to the work.

Before proceeding, it is worth taking a look at the Parc del Cadí, from where we can admire the magnificent fertile landscape of La Seu, blending in with the nearby Parc del Segre and crowned by the mountains that give the park its name and which is a true symbol of the Urgell capital. On the opposite side of the apse of the old church of Sant Miquel, stands the old Church of La Mare de Déu dels Dolors, a building of large dimensions and a modest style from the 18th century, which has been recently restored to house the new, very modern premises of the Diocesan Chapter and Archive of La Seu d’Urgell, one of the most important archives in Catalonia due to the quality of the documentation it holds, the antiquity of which go back to the early days of the Carolingian domination.

A little further south is the large area of the Pati Palau, or Palace courtyard, which owes its name to the huge building of the Episcopal Palace, symbol of the power of the prelates of Urgell, which forms the eastern side of the large square. And we also find here, nestled modestly in a corner of the impressive Episcopal residence, the old courts’ building, on the façade of which there are several coats of arms of Kings and bishops which tell us that the date of its construction was towards the end of the 18th century. To continue with the discovery of the old town centre we go on from Carrer de Sant Roc to Carrer dels Canonges.